In light of the COVID-19 outbreak, we postponed the Wheel of Star Formation conference that was originally planned to take place in Prague in September 2020. The conference will take place on:

All other arrangements, including the place and the venue remain the same. We hope that at that time the pandemic will be sufficiently under control and all the necessary infrastructure will be recovered.

We look forward to meet you in Prague in September 2022 and celebrate together Jan Palouš next birthday!

All the Universe's a stage,
And all baryons and photons merely players,
They have their exits and their entrances;
And one baryon in its time plays many parts.

This is a meeting to celebrate the life-time work and contributions to astronomy of Jan Palouš. Among other topics that have always interested Jan is the gas cycle in galaxies, in particular how star formation influences their evolution. With the advance of new instruments and computational capacities in the recent years, there have been many unexpected observational discoveries and sophisticated simulations. This brings a desire to think anew about these topics, and try to connect these sometimes conflicting findings with the greater picture of star formation as a key element in the evolution of the Universe. The goal of the meeting is to gather researchers actively working in the field, to present and discuss the up-to-date advances and discoveries, as well as identify the important questions and initiate discussions on their solution strategies. The topics that will be covered in particular are: 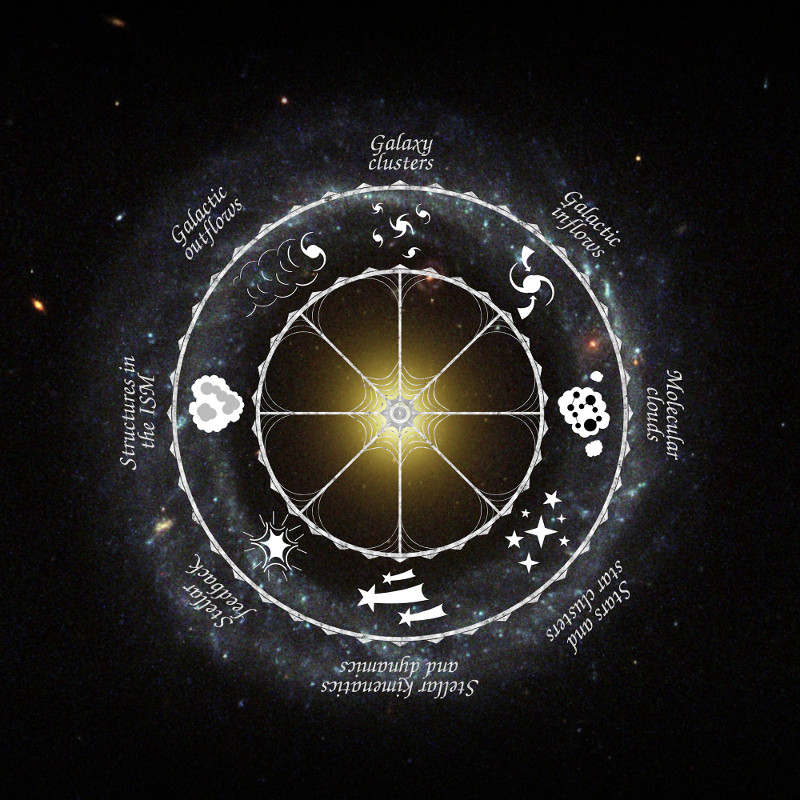 Clusters of galaxies
On the largest scales, the evolution of the universe is governed by dark matter. This provides the scaffolding for the accretion of baryons, allowing the formation of galaxies in filaments, clusters and groups surrounded by hot gas.

Inflow into galaxies
The hot baryonic gas eventually cools and infalls into individual galaxies where it becomes the interstellar medium. In this way the gas in galaxies can be replenished by reservoirs of external material.

Formation of molecular clouds
The interstellar gas is stirred and shaped by many processes taking place within galaxies, and eventually cools further and assembles into dense molecular clouds.

Formation of stars and star clusters
The clouds evolve under the influence of their self-gravity, turbulence, galactic gravity, magnetic field and other processes and form stars concentrated initially in a star cluster.

Stellar kinematics and dynamics
The young clusters evolve dynamically due to various internal and external processes. Most of them do not stay gravitationally bound and disperse into the field stars.

Stellar feedback
The stars, in particular the massive ones, provide feedback on the parental cloud: a fraction of stellar mass is returned to the interstellar medium (ISM) in the form of wind and supernova ejecta; in this way, products of nuclear reactions taking place in stellar interiors are released into the ISM.

Structures in the ISM
The energy provided by stars in the form of radiation, supernova explosions and fast stellar winds is inserted into the ISM and dramatically reshapes its structure, creating bubbles, chimneys and other features.

Gas loss from galaxies
The hot gas produced by stellar feedback may escape from galaxies and eventually be reaccreted. Additionally, gas can be stripped by the dynamical pressure of the intra-cluster medium and thus quench its star formation, but also temporarily boost it at some places, and even trigger star formation outside of the galaxy in the stripped gas.

And so the wheel of star formation is ever turning.